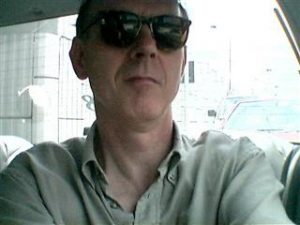 In a Kuala Lumpur taxi with the Petronas Towers nearby. After an incredibly long flight, Roger Frost arrives in Kuala Lumpur and misses the entire winter of 2003. By not reading his plane ticket, he also missed the flight home. Eventually he got back home to Cambridge, UK where he now knows that a flight that leaves at 00.05 today took off last night.

Frost does some rock climbing in Yosemite. Gulp.

Waiting for photosynthesis to happen at Northallerton

Laptops everywhere at Bexley. That’s Frances and Kate at my training event.

rogerfrost.com is a compendium of ideas for using technology. It mostly shows how technology helps find answers to science questions. A home automation section for makers asks those questions around the house. Those who teach science will find every idea here indexed to save your time.

Roger Frost was a copywriter from 1988 to 2016 and this web includes many of his articles. They tell how the early Internet developed; how real scientists work and how real people, like you might use science & technology at home or school. Send a hi via the social links or add a comment to an article. Please use this content freely and link back here if you can.