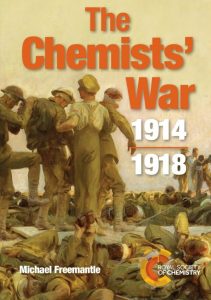 The First World War, that began in 1914, put chemists to work. Their chemicals could harm as well as heal … but on balance the outcome was … horrific.

As the author of two books about the First World War, Dr Michael Freemantle explains chemistry was the destructive force in the war but it also protected the troops, and healed the wounded.

Scroll down for the recording.
Additional notes by Roger Frost – with thanks to Dr Freemantle.

Attitudes to chemical warfare back then:

At one point chemical weapons were considered by the British to be a MORE humane way to kill people. A speech recorded at the USA National Center for Biotechnology Information suggests that the use of chemical weapons may best be understood by listening to the scientists who had firsthand knowledge of their development.

Writing in the late 1960s, chemist James Conant, who directed US GAS production during World War One, said: To me, the development of new and more gases seemed no more immoral that the manufacture of explosives and guns. . . . I did not see in 1917 . . . why tearing a man’s guts out by high explosive shell is to be preferred to maiming him by chemicals attacking his lungs or skin. All war is immoral.

On the German side, Otto Hahn, a future Nobel prize winner in chemistry, was recruited by Fritz Haber to the German chemical weapons program. Otto Hahn went to the eastern front to see the capabilities of this new weapon. The experience left him profoundly shaken: “I was very ashamed and deeply agitated. First we attacked the Russian soldiers with our gas, and then, when we saw the poor chaps lying on the ground slowing dying, we restored their breathing with our rescue equipment. The total insanity of war became obvious to us. First one attempts to eliminate the unknown enemy in his trench, but when one comes face to face with him, one cannot bear it and sets about helping him. Yet often we could no longer save the poor victims”.

Metal helmets – what are they for?

For the first couple of years of World War I, none of the countries provided steel helmets to their troops. Soldiers of most nations went into battle wearing cloth caps that offered no protection. German troops wore that pointy German hat, the leather Pickelhaube. The lethal head wounds inflicted by on the French led them to introduce the steel helmet in 1915.