From Roger Frost’s austerity lab tips, when you run training days in hotels, one improvises, as this tip shows: 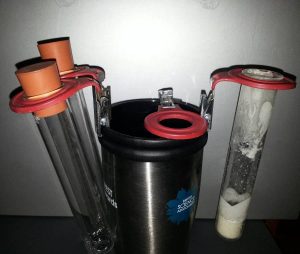 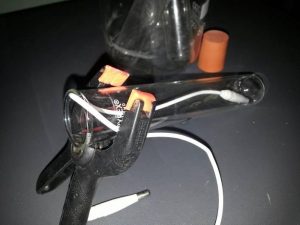 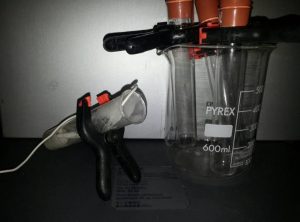 This IKEA tea towel clip gained an unusual second life as boiling tube holder – although it never had a first life as my tea towel holder. On just the first sight of one in the shop I bought 20 of thinking, yes that’ll surely fit a boiling tube. And it did.

You might ask why not use a clamp stand? Well they were for workshops in a hotel where normal equipment would be cumbersome. Another tube holder I used were these clamps bought in Maplin or pound shops. The clamps were attached to boiling tubes half-filled with salol. Several tubes were kept hot in a beaker, ready to be picked out with ease. That lesson involves recording the salol’s temperature with a sensor as it cools over time. The idea was to start the computer recording, pick up the tube and get the probe into it quickly. The computer would graph a cooling curve with the tubes on the bench. BTW if you do this exercise, stir the cooling salol all the while.